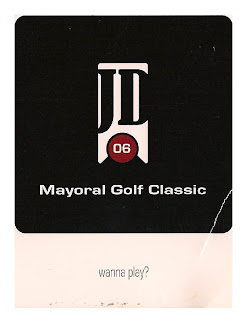 In a January 27th story in the Indianapolis Star, I was quoted questioning Mayor John Ditslear’s campaign financing methods, a system I call the “Money Machine.” My concern? The Mayor invites City contractors and their wanna-bes to give him campaign donations. This is not proof of anything illegal. But the Money Machine system gives the appearance of “pay-to-play,” as if the donation is the cost of admission to being considered for City contracts.

Again, I’m not saying that’s what’s happening, but with this existing outward appearance, if the next mayor were truly conducting an illegal pay-to-play scheme, there’d be no way to tell because it would look exactly the same.

In the Star article, Mayor Ditslear called my argument, “ludicrous.”

Here’s a brief history of what I’m talking about:

In the mid-‘90s, during former Mayor Dennis Redick’s first term, the Money Machine concept took hold locally. It appeared as though the City’s accounts payable records and Planning Department application records had been gathered into a mailing list. These engineering firms, construction managers, architects, developers, consultants, builders, road pavers and trash haulers were invited to a golf outing with the mayor . . . for the price of a donation.

This system was so successful Redick entered the next two elections very well funded.

In June of ’03, after winning the primary election for a 3rd term, Redick was charged with domestic assault and his power began to unravel. John Ditslear threw his hat in the ring, running as an Independent. Ditslear had a record of civic involvement and so had solid local connections to draw upon for contributions. As a result, 90% of Ditslear’s pre-election campaign funds came from local sources.

In the run-up to the general elections, the Money Machine donors largely stuck with the incumbent, Dennis Redick.

But that November John Ditslear won and allegiances immediately shifted. According to campaign fillings, in the 40 days after winning, before he was even sworn in, Redick’s former Money Machine donors sent Ditslear nearly $20,000 – even though the election was over.

It didn’t stop there. Within 9 months of taking office Ditslear held his first golf outing and reaped big bucks from Redick’s old Money Machine donors. And oh what a machine it is. In 2004 Ditslear raked in over $70,000. In ’05 he raised $80,000 and in ’06 took an additional $75,000. Of that nearly quarter of a million dollars, over 75% came from out of town business interests who couldn’t vote in local elections.

None of this is illegal, but it should be, because it’s fundamentally unethical.

An example: When constructing the new city hall, two lucrative contracts were handed out. One went to Odle, McGuire, & Shook of Indianapolis, the architects who designed the building. The other went to Meyer/Najem of Fishers, who would be the construction managers. Neither contract required competitive bids. Both companies’ combined donations to John Ditslear totaled nearly $9,000. Their smallest donations came in the mayor’s first year in office, then grew larger in ’05 and ’06 as the City Hall project was in full swing.

Absolutely none of this suggests anybody did anything illegal. But consider the process: the Mayor sends invitations for a campaign fundraising golf outing to people who can’t vote for him but who’s business relies on winning government contracts, and they oblige.

The Money Machine is dangerous because even though John Ditslear, Meyer/Najem and McGuire, Odle, & Shook may be the most ethical collection of Hoosiers ever assembled – and I’m absolutely ready to believe they are, the next mayor and contractor/campaign contributors may not be. And if that next mayor actually traded contracts for campaign donations – classic pay-to-play, how would we know? We wouldn’t. And what if it’s as simple as a mayor giving contracts to those he feels most obligated to, no secret agreement, just a feeling of obligation because of a big donation? That’s still wrong.

Is that argument “ludicrous?” I don’t think so. That’s why 7 states, including neighboring Illinois have barred entities bidding on governmental contracts from making political contributions to government officials. This movement has been prompted by a wave of pay-to-play scandals across the country.

In the Star article, Mayor Ditslear actually argued, “They [the donors] offer to help me get re-elected because they think I do a good job,” and “I don’t invite people because they do business with the city; I invite people who I think would enjoy a round of golf and a nice meal.”

First off, they generally don’t “offer,” they’re asked to donate. And go to the county’s web page (http://www.hamiltoncounty.in.gov/), click the “Laws, Elections . . .” tab in the right hand sidebar and download Mayor Ditslear’s campaign filing for 2010. Look through the list of donors and see how many typical Noblesville voters you find - you know, local folks who think the Mayor is doing a good job and want to enjoy a round of golf and a nice meal with him.

Good luck with that needle-in-a-haystack endeavor. There are only a few on the donor list. The overwhelming majority are people who don’t live in Noblesville and can’t vote for Ditslear. So if he’s looking for people who think he’s doing and good job and want to help him get re-elected, why doesn’t the Mayor look in Noblesville? Why is he pursuing out of town people who have and/or want City contracts – people who can’t vote for him?

As ironic as it is unfortunate, at least once when he invited these out of town contractors to donate, the front of the invitation read, “Wanna Play?”

Posted by The Hoosier Contrarian at 5:25 PM 2 comments:

“Beer is proof that God loves us and wants us to be happy.” –Ben Franklin

Entering the Brewers of Indiana Guild Winterfest at the State Fair grounds with my oldest son Cal Saturday there was a giddy thump in my heart: the promise of endless samples of micro-brewed beer.

Once through the doors a lanyard is placed around our necks with a handy rubber O-ring that cradles a small drinking glass. Love it, love it, LOVE IT! Don’t have to hold the beer glass while I’m eating.

Did I mention I love it?

We hit the closest row of brewer’s booths, getting 2 oz. samples at World Class, BBC, Victory and 3 other breweries in a sipping flurry. It’s only when we make it through the Harpoon, Brooklyn, Rogue, Pyramid, Sam Adams and Sierra Nevada booths I realize we’ve already had the equivalent of 2 beers.

There is a passing notion to pace myself.

And frankly, I don’t like some of what I’m drinking. So before the next sample, I ask the brewer to dump out the last half of the last brewer’s sample from my cup. This endears me to the guy. He winks, nods and smiles as if to say, “Yeah, that guy’s beer sucks.”

All along the way we’re filling our swag bags with free bottle openers, coasters, and a broad assortment of stickers I have absolutely no use for, but hell, they’re free. I even get a Bell’s Brewery temporary tattoo. Sah-weeet!

There are fashion trends at work. People are wearing homemade necklaces made of ordinary cotton string strung with pretzels. Some get clever with a big baked pretzel as an eye-catching pendant, surrounded by smaller store-bought pretzels. Drink a little beer – eat some pretzels - repeat as needed. 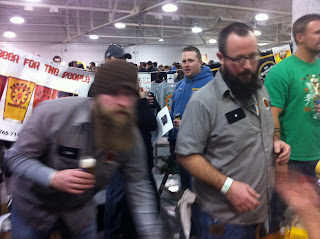 I have no pretzel necklace and suddenly feel naked. 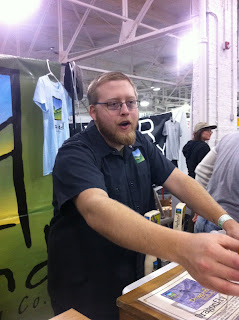 Cal proclaims, “Lotta neck beards here,” as we move to the second aisle of booths. He’s right. There are a lot of guys pouring brew with neck beards – you know, where the guy doesn’t shave his neck. This is often accompanied by a gray or muddy-khaki button up shirt, occasionally accessorized with a sock cap.

In all, it’s a pretty mellow crowd. You’d think copious drinking would lead to trouble, but no. The fact that everyone is drinking a depressant might have something to do with it. Folks smoke around the campfires in the Beer Garden, helping each other lite up, making room for strangers, letting others cut in line I front of kegs. 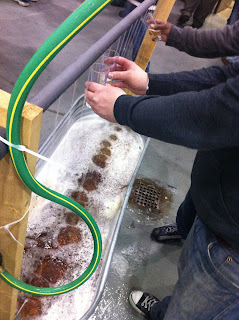 The Rinse Tank: Nobody wants stout foam in their porter.

Halfway down the 2nd row I realize I’m not really an India Pale Ale (IPA) guy anymore. This style was originally created for transport to British troops in India. The extra hops acted as a preservative and the extra strength allowed for bottle fermenting on the long journey ‘round the horn of Africa. I learned to like it back in the day when it primarily came from England and India. But when the American microbrewery craze hit in the late ‘80s, the IPA seemed to morph into a super-hoppy, tongue-burning, blazing guitar solo of a beer. And like guitar solos, the first couple are pretty damn cool, then I just wish they’d stop. And they like to give ‘em cute names like Good Karma, Yellow Snow, Bitter Woman, Torpedo Extra.

Yeah, whatever beer dudes. I’m not looking for beer acrobatics. As I age, I find I admire the finessed dipsy-doodle more than the in-your-face-slam-dunk.

Somewhere in the fog of booth hopping someone calls out, “Kurt,” and grabs my arm. It’s Marsh Davis, President of Historic Landmarks Foundation. Known the guy for 20-plus years. He gives Cal the, “I knew you when you were this high,” routine. We catch up and move on. 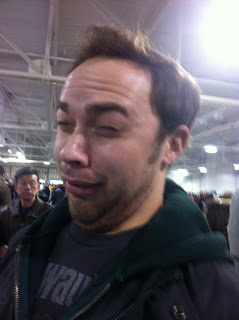 Cal has taken to inserting himself in the background of group photos. He’s tall, so he stands behind any group of strangers posing for a picture, then makes this bizarre ugly face (at right).

The most endearing thing about the microbrewery movement is that many of those pouring samples actually brewed it themselves. They’re trying to carve out a little flavor identity in their Indiana Town. I sampled beers from Aurora, LaPorte, Brazil, Brown County, Kokomo, Lafayette, Auburn, Warsaw, Elkhart, Crown Point, and yes, Noblesville’s own Barley Island. The crowd is bias in favor of these little guys, with a nod of respect toward the big guys who were once little guys, with the exception of the chain restaurant brewers like RAM – which I actually heard someone boo as they passed up a sample.

As Cal and I stumble out into the cold air of the Fair Grounds there’s a warmth in my chest, clouds in my head, and a latent IPA burn on my tongue. And almost immediately, there’s our designated driver, my 19-year-old son, Jack pulling up beside the Coliseum.

Posted by The Hoosier Contrarian at 5:51 PM 2 comments: