In my first memories of Anna she’s 7 years; a blonde child with a round face punctuated with a little v of a chin. She’s bounding through our neighborhood with her little sister, Maggie, a redheaded cherub run right off a Campbell’s Soup.

Anna’s parents were the first close friends Greta and I made as a newly married couple. The four of us partied together, dined together, were civic volunteers together and worked on our historic homes a block away from one another. And in a summer when both my wife and Anna’s mother were pregnant, we sat with them in a movie theatre when her mother went into labor with her little brother Tommy.

As she grew Anna revealed herself as smart, headstrong and intrigued by the world outside the ordinary. One night when our families were eating together she refused to touch the meat entrée proclaiming she was going to be a vegetarian. Her father pointed out that she didn’t much like vegetables, but she couldn’t be moved.

During her parent’s divorce she and I locked heads time and again, never more so than the day friends helped my family move to a new home a block down the street from the old one. Anna was 13. Eating pizza in our new kitchen at the end of the day’s work someone commented about how clever Anna was. She chose to prove it by listing her insights into her parent’s divorce. My heart ached knowing this was hurting her father, who sat silently nearby. So I attempted to argue her into silence. A mistake.

When she finally insisted she was as smart as any adult because she had seen what was happening between her parents, I shot back, “Yes, but you weren’t smart enough to know not to talk about it out loud in front of this crowd.”

That silenced the room and silenced Anna.

In the years that followed - whether at a cookout at her father’s new house or the wedding night I was the best man at her father’s 2nd marriage, there was coolness between Anna and I born of that hurtful argument.

As she grew into a woman I barely noticed, wrapped up in my own family and with our contact fragmented by the two separate homes where she lived. At the periphery of my world she graduated from high school and went off to college, coming home once with dreadlocks (not very many pasty white girls can pull that off). She was left-of-center, making me predisposed to want to know what she was reading and listening to. We often compared notes and critiqued each other’s choices. I recall us laughing once about the little boy in the movie, “O’ Brother Where Art Thou,” who claimed his mother had “R. U. N. N. O. F. T.’d.”

As a young woman in her early 20s, she came home from college with breast cancer. And it was only then that I realized the kind of woman that little girl had become. She greeted everyone with a beaming smile and electric blue eyes. The hard edges of her opinions polished and softened. They were still there, but no longer a constant challenge to the listener. Because she worked at Smith’s Jewelry store that was next door to the coffee shop which was my home away from home, we spoke often.

Chemo gave her a baldhead like mine and I teased her about stealing my haircut. She eventually beat breast cancer with dogged determination and uncommon grace.

Sometime after her hair returned, we sat with a few other folks over lunch at the coffee shop. As others returned to work, we eventually found ourselves the last two sitting on the big green couches. We reminisced about that distant world where her parents were close friends with Greta and me and the children from both families played in the same neighborhood.

Out of the blue she said, “I’ve often thought of you as a sorta second father . . . this other male voice of moral direction in my life.”

I was dumbfounded. If I’d been asked to list ten things she thought of me, that wouldn’t have been one of them.

Eventually the cancer came back. It wasn’t stronger than her high wattage smile or strong enough to overpower her whit and grace, but it slowly took everything else.

Knowing she needed company, my wife invited her for lunch one day this summer. I drove home from the office, not having seen Anna in a couple months. To find her pale and using a walker took my breath away. We all sat on the brick patio beneath the wisteria on a warm summer afternoon talking.

We reminisced about years gone by, conflict and kindness among family and friends as our cat wound its way between her feet and another young friend’s baby crawled in the grass nearby.

A few weeks later the walker was joined by a wheelchair.

While lunching downtown a month ago I bumped into her mother. She told me the high threshold at her backdoor prevented Anna from getting her wheelchair onto the backyard deck. On my way back to the office I popped home to get a hammer and crow bar and drove the two blocks over to her mothers house.

Coming through the back screen door I found Anna in a bed in the middle of the living room, watching the HBO series Six Feet Under on DVD. I bent down and hugged her, saying that it was my favorite television drama of all time. As I pried the threshold from the back door jamb I told her the show was hard to watch back to back on DVD – too depressing to watch more than a couple episodes at a time. She craned her neck back over her pillow and gave me a mystified smile. “Why can’t you watch more than a couple episodes?”

I shrugged my shoulders without saying anything. Couldn’t bring myself to say it’s because the show is about death and a couple hours in one sitting was about all I could take. That she didn’t get the death connection but was fascinated by the writing and the characters said a lot about Anna. 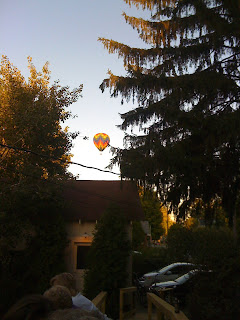 On the day Anna died in that bed in that room in her mother’s house, her father called and asked us to come over for a beer. Greta and I went and stood on the back deck and laughed and cried with the family and an assortment of old friends. At one point a hot air balloon appeared between the trees at the end of the street just long enough for me to snap its picture with my phone.

About that time, inside the house, someone turned on the stereo to the “O’ Brother Where Art Thou,” soundtrack. The familiar picking intro to “A Man of Constant Sorrow,” filled the air. And I thought of the woman from the film who had, “R. U. N. N. O. F. T.’d.”